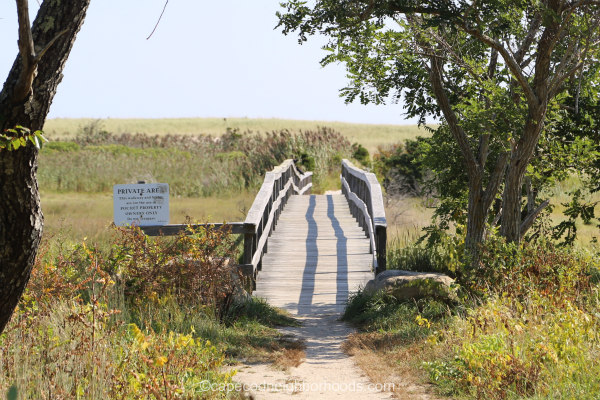 Unlike some of its more remote neighbors, Orleans is considered a year-round community.  Residents range from vacationers with second homes to young families and retirees, all of whom enjoy the diverse mix of shops, restaurants, and other conveniences.  Orleans is also home to Nauset Beach, distinguished by big waves and long stretches of white sand as well as spectacular sunsets.  Read more about Orleans real estate.

Orleans was first settled in the late 1600s by Pilgrims from the Plymouth Colony who were dissatisfied with the poor soil condition further north.  Captured twice by the British during the Revolutionary War, Orleans was named in honor of Louis Philippe II, Duke of Orleans in recognition of France’s support for the Thirteen Colonies during the War.  Early town organizers specifically avoided selecting a British or “English” name and Orleans lives on as the town name to this day.  Windmills dotting the landscape are a testament to the area’s early reliance on salt-making as a major industry – the windmills were used to pump salt water into shallow vaults for evaporation.  The Jonathan Young Windmill on Route 28 is a popular icon of this earlier time.

Housing stock includes both year-round homes ranging from Cape Cod-style properties to ranches and stately colonials.  Orleans also features a number of waterfront estates and oversized “cottages” that provide magnificent views of the harbor as well as deeded pond rights.  Along with Brewster, Eastham, and Wellfleet, Orleans belongs to the Nauset Regional School District set against the backdrop of the National Seashore and Nauset Light house.  Each town operates an elementary school for their own students and then combines middle and high school students in the regional school.

Orleans is located in the Lower Cape and has frontage on both the Atlantic Ocean and Cape Cod Bay.  It is bordered by Eastham to the west,  Brewster to the east and Harwich to the southeast.  It is located 36 miles east of the Sagamore Bridge and 90 miles southeast of Boston.

There’s no doubt that boating is a big part of a Cape Cod lifestyle, and for many that means looking local when it comes to the design and purchase of a boat, as well. That’s why ... Read more about Handcrafted Cape Cod Boats

It’s been hundreds of years since people were last allowed to explore Sipson Island, but after all this time it’s finally open to outside visitors. It’s the opportunity of a ... Read more about Exploring Sipson Island

Whether sailing, kayaking, fishing or lounging on the sand, Pleasant Bay presents a wealth of options for Cape Cod visitors and locals alike. Close to Harwich, Chatham and Orleans, the bay is ... Read more about Pleasant Bay: Boating, Beach & More

The summer season may be big on Cape Cod, but there’s are a number of “can’t miss” Christmas activities that are just getting started. Pilgrim Monument Lighting- Nov 27-Jan ... Read more about Can’t Miss Christmas Activities on Cape Cod