Why are rip currents so dangerous? 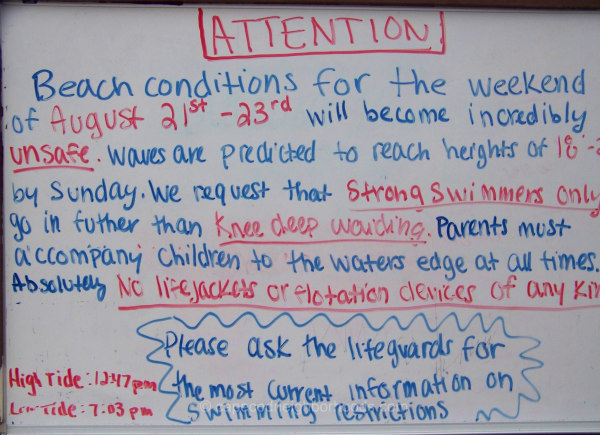 Swimming in the ocean can be a lot of fun, but you do need to take some extra precautions.  While it may not seem all that different than swimming in a lake, the ocean can sometimes be unpredictable.  A change of the tide, the waves, the wind or even the slope of the beach can contribute to dangerous rip currents, sometimes when you least expect them.

The thing to remember about the ocean is that conditions can change quite quickly, sometimes from day to day and sometimes simply from one hour to the next.  Before you dip even a single toe into the water you’ll want to take a moment to watch the waves.  The emerging patterns can shed some light on potential rip currents.

The thing to note about rip currents is that they are possible anywhere there’s a beach with breaking waves.  While sometimes they happen in the same spot, they’re not always consistent.  As well, the danger lies in how strong of a current it is.

One of the most important things you need to remember if you’re ever caught up in a rip current is NOT to swim against the current.  Instead, start swimming across the current.  While swimming parallel to shore may seem counterproductive, you’ll want to swim this way at an angle to get back to shore.

Other things to keep in mind include trying to stay as calm as you can, while still swimming.  If you need help, try and signal those on shore.  Some of the other tips for swimmers include things you should think about before ever leaving the dry sand.  For example, it’s always a good idea to swim in places that have lifeguards.  Part of a lifeguard’s job on the beach is to be on the lookout for rip currents.

Also, don’t swim alone and make sure you know what your swimming ability is.  As well, there are more common sense tips to keep in mind like not drinking excessively while you swim and only letting kids swim with adults.

A calm, sunny day, too, is no guarantee when it comes to rip currents.  Unfortunately, they can happen at any time.  That’s why it’s always important to be smart when you go swimming, especially when at the beach.