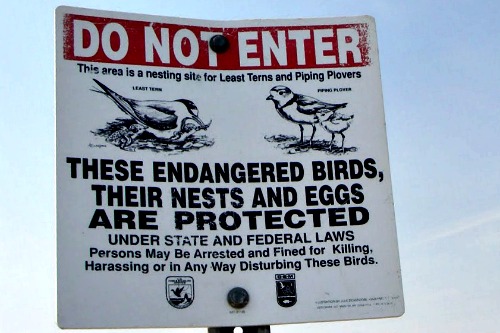 Just as people flock to Cape Cod during the late spring and summer season, so do birds and animals.  One of the most well known up and down the Cape is the piping plover.  Although the bird is well regarded by the nature-loving crowd, it sometimes is at odds with visitors forced to make alternate plans.  That’s because the piping plover is federally threatened in the state of Massachusetts, and therefore protected.  This means some parts of the Cape are off-limits to humans during certain times of the year.

If you’ve never heard of a piping plover, you soon will visiting the Cape.  In the mid 1980’s, efforts began to help restore the bird’s falling population in Massachusetts.  This led to fencing around nesting grounds and restrictions of off-road vehicles on the beaches where piping plovers were found.  Efforts also included putting up structures to help protect the plover nests from any predators.  Those efforts worked, helping to increase the number of birds substantially over about a decade.

These days, visitors and homeowners along Cape Cod will notice the birds first show up on area beaches sometime around late March to April.  They’re usually found on barren, sandy beaches, oftentimes with clumps of grass and not far from the water.  The plover builds its nest right in the sand, sometimes bringing in small shells or pebbles to line it with.

The piping plover lays its eggs around late April, and you’ll usually start seeing the chicks hatch from late May through August.  The birds feast on such things as mollusks, crustaceans, insects and sandworms while visiting the Cape, then leave to fly south again by late August.

While the birds may mark the spring and summer season along the Cape, some people aren’t so happy about all the restrictions that go into protecting the plover.  In fact, some kite surfers are trying to change things.  Currently, the U.S. National Park Service bans kite surfing between mid March and mid October along the Cape Cod National Seashore.  Supporters of the ban say it’s needed because the kites end up scaring away not only the plovers but also other threatened shorebirds from their nesting grounds.

Some kite surfers on the other hand think they’re being singled out, saying that while they’re banned from the sport in the area during this time, those sailing and taking part in other water activities are not.  For now, though, the birds get priority, as they’re still considered threatened and therefore protected along the shores of Cape Cod.