Submarine Ran Aground on Nauset Beach in 1925 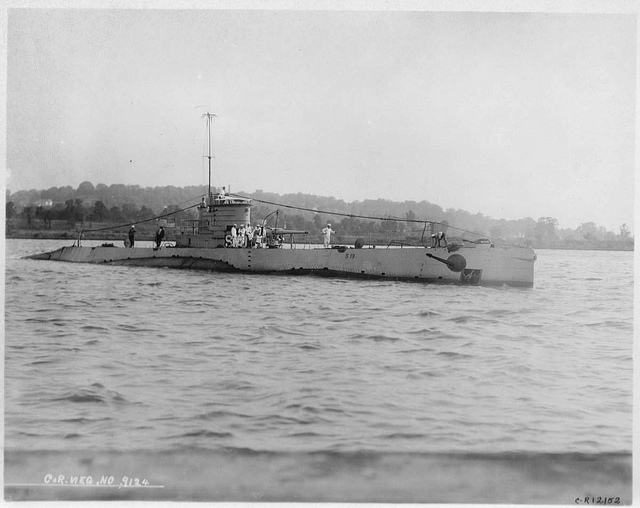 There is a lot of history to be found along the Cape, especially concerning the area’s rich maritime past.  One of the best-known tales, though, was an especially perilous ordeal.  January 13, 1925 was the day that the USS. S-19 ran aground on Nauset Beach, becoming the largest of its kind to ever wash up on one of Cape Cod’s beaches.

The submarine headed out from the Portsmouth Navy Yard the day before, and was supposed to land in New London, Connecticut.  However, the sub never made it that far.  The crew of 40 soon found themselves caught in strong winds, thick fog and treacherous seas.  The submarine ran aground off the southern coast of the cape near Chatham, far off its original course.

Two Coast Guard cutters tried to reach the submarine with a line but weren’t able to get to it.  In another harrowing rescue attempt, a Coast Guard crew launched a boat headed towards the sub.  They got about 100 feet away before capsizing in the rough surf.  A third attempt to reach the submarine ended with a smashed boat, but luckily no lives lost.  In a miraculous move, all of the men that were part of the rescue crew hung on long enough before they were safely rescued.

Eventually, the submarine crew was rescued, too.  On January 15, members of the Coast Guard were able to board the sub and get the crew back to shore.  Coast Guard cutters and Navy tugs finally pulled the submarine out about six weeks later.  After repairs, the submarine went to Pearl Harbor, and was decommissioned in the mid 1930s.

The USS. S-19 was buried at sea in December 1938, nearly 14 years after the near disaster.  It now sits just off Pearl Harbor, far from its original call of duty along the East Coast.

While the submarine’s most notable role in history was made that stormy January day in 1925, it is also well know for its fictional references in the literary world.  The S-19 is one of the submarines featured in Taylor Anderson’s Destroyermen Series.  Of course, with that tale the sub had a true out of this world experience.  In service during World War II, the sub was then transported to another alternate Earth.

While the real story was somewhat hard to believe too, it still goes down in history as one of the most remarkable tales you’ll ever hear about the Cape to this day.