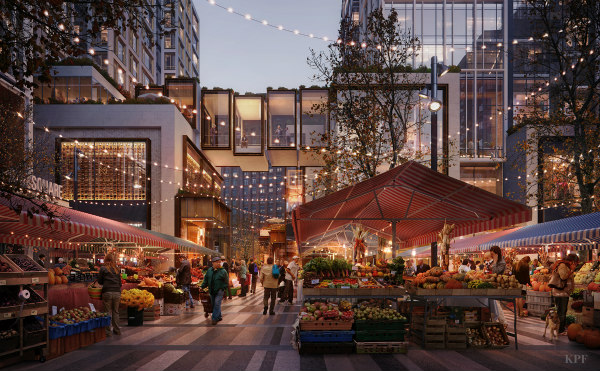 New retailers and restaurants are headed to the Seaport District, as the area gets set to welcome in a new, European-inspired town square. Plans call for the town square to open up on the two lowest floors of the EchelonSeaport development.

The luxury condo complex already includes more than one-million square feet of mostly residential space, including more than 700 apartments and condos. The planned “town square” is expected to bring in about 125,000 square feet of additional dining options and retailers.

Called The Superette, the space will likely include dozens of new restaurants, stores and entertainment venues. The retail development will take up an entire city block in the Seaport District, and plans call for it to be centered around an outdoor piazza.

Already mentioned tenants of The Superette include such names as Daniel Cremieux, Alo Yoga and Rag & Bone. Plans also call for a full-service salon, a custom framing shop, a speakeasy cocktail bar, an electric vehicle shop and an indoor mini-golf arena to join the development.

More tenants will likely be announced in the near future. The Superette is expected to open either later this spring or by next summer.

Along with plans for The Superette and its residential options, EchelonSeaport also boasts tens of thousands of square feet of residential amenities, including swimming pools, a fitness center, sky lounges and an indoor basketball court.

Other options include the property’s outdoor dog run and pet spa, a family play center and some rooftop gardens. EchelonSeaport is part of a much larger development, where plans call for a total of more than one-million square feet of retail space in the future.