Chatham In The Movies 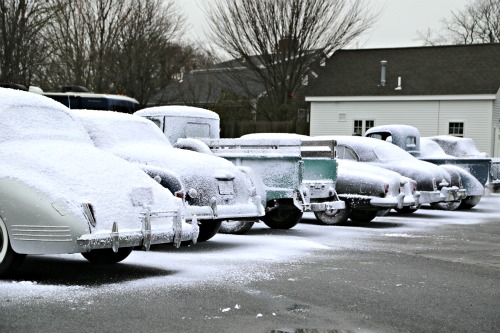 Cars used in filming The Finest Hours movie in Chatham

One of the Cape’s darkest days has also been remembered over the decades for its sincere acts of courage and heroism.  Later this year we’ll be reminded of that time when a new Disney-financed film comes out.  Titled “The Finest Hours”, the movie chronicles what’s well known in the Cape Cod area simply as “The Pendleton Rescue”.

The movie takes a page from the book of the same name.  It takes us all the way back to 1952 when four courageous members of the Coast Guard made history.  They took off in a small, wooden motorized lifeboat, battling snow, wind and high seas to rescue dozens of men from a sinking tanker named “Pendleton”, one of two boats hit hard by a raging Nor’easter.

In fact, according to history, the Pendleton actually broke apart into two pieces.  It was sinking, and the men onboard didn’t have much time.  In all, the tanker’s captain and seven crewmen died in the tragedy, however the brave rescuers assigned to Chatham Lifeboat Station were able to save 32 others, despite remarkably difficult conditions working against them.

This past December, film crews began recreating some of the scenes portrayed in the movie in Downtown Chatham.  Actors Chris Pine, Casey Affleck and Holliday Grainger are all part of the cast.  Locals will probably recognize many of the sites shown in the film, including Fore River Shipyard in Quincy, as well as parts of the South Shore and, of course, parts of Downtown Chatham.  Specifically, sites like Lighthouse Beach, the Coast Guard Station and Stage Harbor may all be spotted in the finished movie.  A number of extras have also been added to take on small roles in the film, shot on-location along the Cape.

While “The Finest Hours” tells a fantastic story of bravery, it also makes movie-making history of a different sort for the state.  This movie is the largest one ever to be filmed in Massachusetts.  The $85 million project may be closing down some areas of town for a short time, but it’s also bringing in a lot of money to the Cape, and to the local economy.

Amazingly, the old wooden rescue boat is still around today.  It was restored by the Orleans Historical Society.  You can check out all of the actual sites for yourself right now, but you won’t be able to see the movie version until it’s released, likely sometime this fall.